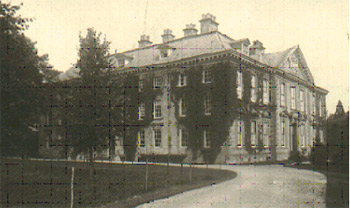 In 1086, Wootton Wawen's entry in the Domesday book read as follows:

"Robert holds 7 hides in Wootton. Land for 9 ploughs. 23 villagers with a priest and 22 smallholders who have 6 ploughs. 2 mills at 11s and 8 sticks of eels; woodland 2 leagues long and 1 wide. Value £4. Waga held it freely." (A stick of eels consisted of 25, therefore payment of rent totalled 200 eels.)

In comparison, there were 676 inhabitants living in Wootton Wawen in 1861, according to the census. This number had increased to 2,264 in 1931 (Kelly's Directory, 1940). In 1999, there were an estimated 1,350 inhabitants living in the village. Wootton Wawen has always primarily been a farming settlement, but over the centuries industrial activity has included a fulling-mill for the production of hemp and flax on Wootton Green, and a dyehouse at nearby Blue Hole. In the early 19th. century, Squire Holford (married to a Smith-Carrington) built the Paper Mill on the main Stratford Road, which subsequently became a corn mill, a social centre, and most recently, residential flats. There was also a hurdle-making industry in the village for a time.

Directories from the 19th. century list a number of tradesmen living in the village including millers, carpenters, builders, coal merchants, and a shoe-maker - as well as publicans at the Bull's Head and the Navigation Inn. In Kelly's Directory of 1940, the commercial listing included an osier merchant and a motor engineering company, in addition to farmers and shopkeepers.

Over the centuries, Wootton Wawen has been home to a number of notable families, including the Harewells and Smith-Carringtons who held the manor until the 18th. century, and returned in the late 19th. century. During Elizabeth I's reign a manor house was built on the site of a miller's cottage but in 1687 a new hall was built in the Palladian style by the 2nd. Lord Carrington. In the late 18th. century, Squire Holford rechannelled the Alne and constructed the weirs.

Other leading families included the Somervilles of Edstone Hall, who were succeeded by the Knights of Barrells Hall in Ullenhall. William John Fieldhouse built Austy Manor in 1912 in the Cotswold manor house style, and erected the Seymour's Homes in memory of his son. In addition to the church and the Hall, the village contains an interesting selection of listed buildings from a number of periods.

Half-timbered and other notable buildings include 'The Bull's Head Inn', 'The Priory' and 'Manor' farmhouses, 'The Old Vicarage', 'Lilac Cottage', 'Travellers Rest' and 'Little Croft', the former workhouse. The former National School, erected in 1857, is situated at School Hill on the Stratford Road.

Later Developments up to Present Day

Although the area around St. Peter's still marks the centre of the village, Wootton Wawen has spread out considerably. Today it includes a number of more recent developments along Alcester Road and Mayswood Road, plus the mobile home park at Wootton Hall, which was taken over by the late Bill Allen in 1958. There were also changes for the village's Catholic community, who moved to their new church, Our Lady & St. Benedict's, in 1904, following the closure of the chapel adjoining the Hall. Today, the A3400 is a dominant feature of the village. Its forerunner was the Birmingham to Stratford turnpike Road, which opened in the mid 18th. century. The toll-house on the comer of Alcester Road and Wawensmere Road served the original turnpike road from Alcester to Wootton Wawen.

The Birmingham to Stratford-upon Avon Canal opened in 1816, and passed through Wootton Wawen via an aqueduct built by William Whitmore in 1813. For the first time on 1st. July 1908, villagers in Wootton Wawen were able to travel from the village station on the North Warwickshire Railway running between Birmingham and Stratford.

Wootton Wawen has adapted well to change over the centuries and has managed to retain all the essential elements of a thriving rural community. Despite its proximity to all the developed facilities offered by major towns such as Stratford-upon-Avon, Warwick and Leamington, and to the City of Birmingham, Wootton can still boast several excellent shops (including three selling groceries); a Post Office; two Pubs; a Restaurant; two Social Clubs; a Ladies Hairdresser; two Garages; Art, Antiquarian Books and Furniture Restorers; several Craft Workshops and a Costume Hire business! In total, there are nearly 40 businesses operating in Wootton, employing over 300 people - ranging from one-man operations, meeting specialist needs, to major National/International organisations such as the 'British Pregnancy Advisory Service' at Austy Manor. Farming remains a major local industry, despite current difficulties, and the lovely surrounding countryside is still Wootton's dominant feature.

The village lies in the Green Belt and is an integral part of the 'Arden Special Landscape Area'. The older part of the village straddling the A3400 is designated as a 'Conservation Area' because of its open, rural character and many fine, old buildings.